An illegal lockout of the Hernandez family

Ms. Hernandez’s daughter called at 6:20 pm, crying hysterically on the phone, because the landlord had just locked out her family. Ms. Hernandez, her daughter and grandchildren live in a shed at the back of the property, which is technically an illegal unit. The landlord left the family on the sidewalk with their furniture and nowhere to go.

The Hernandez family only lives a mile away from me, and my wife and I were at home when they called. We immediately drove to their home.

I spoke to Ms. Hernandez when we arrived, and I assessed the situation. The landlord was there, and I was able to speak to them. The landlord kept saying, “It’s not an apartment, it’s a shed; there is not an official lease.” I told the landlord that they can’t lock this tenant out without a court order. While I was talking to the landlord, my wife called the police.

After talking for 15 minutes, the landlord agreed to let the Hernandez family back inside their home with their possessions.

The police arrived after the unit was open and the landlord repeated the same complaints to the police as they had to me.

Thankfully, the police stated good law: you can’t lock these tenants out without a court order; it doesn’t matter if it’s a shed. This family lives there, and you have known they live there. The landlord complained about late rent payments, and the police’s response was firm: you can’t lock them out for that reason, you must go to court.

*Name changed to protect identity of client. Photo not representation of any particular client or client property. 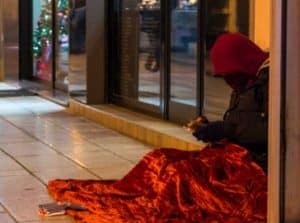